On December 16, 1990, in the context of the first wave of movements for Albania’s democratic transformation, a group of public intellectuals founded the Albanian Forum for the Protection of Fundamental Human Rights and Freedoms, which was later named the “Albanian Helsinki Committee” (AHC). AHC was founded from the very start as a membership organization and as a non-profit, non-governmental and non-party subject. The organization initially focused on the rights of persons persecuted by the totalitarian regime that ruled Albania in the second half of the 20th century, and played a leading role in the education of the Albanian society with regard to the international framework of human rights.

On March 22, 1992, the AHC became a member of the International Helsinki Federation for Human Rights, based in Vienna. During this quarter century, AHC has been and remains the most prominent organization for the protection nd promotion of human rights in Albania, as well as a leading partner for other non-government organizations, Albanian public institutions, international agencies and programs that work to advance respect for human rights in Albania

The highest leading body of the AHC is the General Assembly of Members, composed of 14 members (presently 2 women and 12 men), which elects the Directing Board. The Board consists of 5 members (presently 1 woman and 4 men) and functions as a decision-making body between two Assembly meetings. AHC’s work is led by the Executive Director (presently a woman) who is elected by the Directing Board. At present, AHC employs 8 full0time persons (see organogram below) and, based on project needs, hires part-time experts of different areas, selected from among the group of collaborators and trained and qualified organization activists (about 200 collaborators, of which 150 specialize in election monitoring). AHC has also established a network of 7 correspondents (employed part-time) living in Kukës, Gjirokastër, Fier, Vlorë, Korçë, Elbasan, and Shkodër (3 women and 4 men). This network of collaborators observes and monitors respect for human rights in relevant districts and plays the role of the organizer in the implementation of AHC initiatives and events in these districts.

AHC exercises its activity all over Albania, but the organization’s office is based in Tirana. AHC has contracted by rent the premises it uses as offices and only owns the office’s necessary electronic equipment as well as a vehicle. 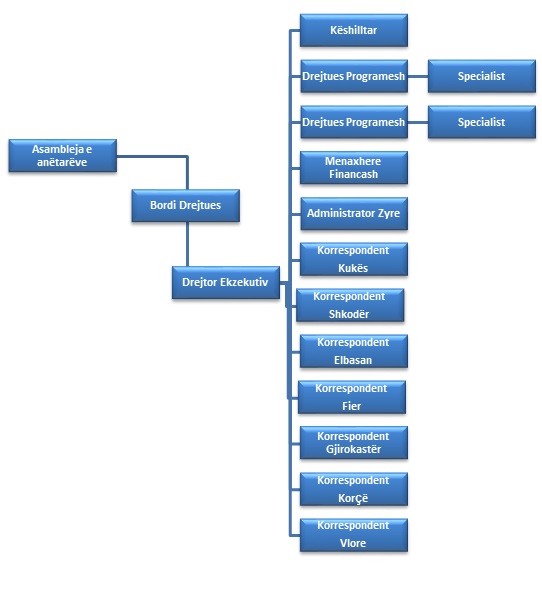