The new constitutional and legal framework for the reform of the justice system, foresees the organization and functioning of new governing justice institutions, specifically, the High Judicial Council (HJC), the High Council of the Prosecutor’s Office (HCP), the Justice Appointments Council, the High Inspector of Justice (HIJ) and the School of Magistrates.
The Albanian Helsinki Committee (AHC), in the frame of the project “Civic engagement for a functional judiciary system and access to justice in Albania”, funded by the European Union and implemented by “Save the Children” and “Centre of integrated Legal Services and Practices”, for the period of April 2018 – March 2019 will implement the project “To increase the independence, accountability, transparency and efficiency of New Governing Justice Institutions”.

Why is it necessary to undertake this initiative?

1. AHC’s monitoring regarding the implementation of reforms in the justice system, pointed out delays in the establishment of the justice system institutions such as the High Judicial and Prosecutorial Council (HJC and HCP), and the Justice Appointments Council. This has contributed to the lack of vacancies in the Constitutional Court and the High Court, the appointing of the General Prosecutor with a full mandate, and also in failing to establish specialized institutions acting against corruption and organized crime.

2. Selection by random of the non-judiciary and non-prosecutorial candidates for HCP and HJC, in the absence of consensus among the members of the parliamentary sub – committee, although it was one way to unlock the process, we evaluate this process to be unsatisfactory, as members of such institutions are not chosen based on merit, qualification, or integrity, but by random chance.

3. There was also a delay in the election of the judges and prosecutors for the HCPO and HJC. The candidates are currently undergoing a vetting process by the responsible vetting bodies; however, this is a process that requires more dynamism, without damaging the quality of this process.

4. Law no. 115/2016 “On the Governing Institutions of the Justice System”, it is dictated the need for its revision, as some provisions of this law have been repealed by the Constitutional Court with two different verdicts in 2017 (no.41 and no.78). The reviewing of these provisions also requires the contribution of local expertise, and also the contribution of the international expertise.

Guided by the AHC mission, our initiative will consist of monitoring the establishment, organization and functioning of new institutions of the justice system governance, and in particular of the two Councils; the High Judicial and the Prosecutor’s Office. The focus of AHC’s initiative will be transparency towards the public, accountability, efficiency and the quality of decision-making by these collegial bodies, especially in the exercise of their competencies regarding the status and career of the judges, prosecutors etc.

The findings and conclusions resulting from AHC monitoring will be brought to the relevant national justice institutions and to international organizations, which contribute in the improvement of our country. According to their importance, the findings will be periodically communicated to the media and the public to enable the process to become more transparent for citizens, who seeks to regain their trust in the independent justice structures. 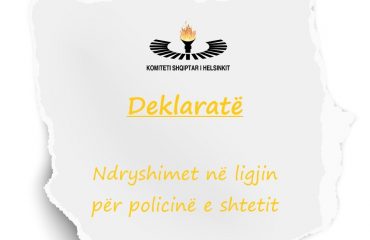