On the monitoring of the judicial administrative process on

Pursuant to its mission, the Albanian Helsinki Committee (AHC) monitored the judicial administrative process at the Administrative Court of First Instance, to secure the lawsuit regarding the closing down of the activity of the Private Pre-university Education Institution, Kindergarten “Zubeyde Hanim”, Tirana”. The judicial process extended over three hearing sessions, held on November 9, 2022 and November 14, 2022.

Earlier, AHC monitored also the judicial administrative process on “securing the lawsuit requested by the Gulistan Foundation, regarding the closing down of the Mehmet Akif Ersoy College (private pre-university education institution).” The conclusions of this monitoring process were made known to the public.[1]

With a focus on observing respect for fundamental rights and freedoms in the country, namely the right to guaranteeing free and inclusive education and the right to due process, as well as in respect of article 145, paragraph 3 of the Constitution, AHC does not seek to influence the activity of the judicial power. In this sense, it is worth clarifying that the case in question may also be the subject of further appeal in the Administrative Court of Appeals. Nevertheless, for the sake of transparency and the right of the broader public to become familiar with this sensitive issue, AHC wishes to share with the public some of the preliminary findings of the observers who monitored the hearing sessions of this case.

AHC observers noticed that the position of the court toward the litigating parties, in some important elements of the normal conduct of the process, gave rise to questions about the principle of impartiality and contradictoriness. More concretely:

Per the above, AHC observers consider that proper management of the deadlines and realization of the judicial process by issuing a decision within a reasonable time is a direct competence of the Court and not of the litigating parties. Based on the highest interest of the child, which should guide any action undertaken by public authorities, including judicial instances, AHC deems that the Court should have taken into consideration the right to education and the freedom to choose an educational institution, guaranteed and legally protected by a series of international acts.[3]

At the end of the hearing, the court decided that the conditions of article 29 of law 49/2012 are not met and, as a result, the request of the petitioning party to secure the lawsuit should be rejected as unfounded on evidence and on the law. 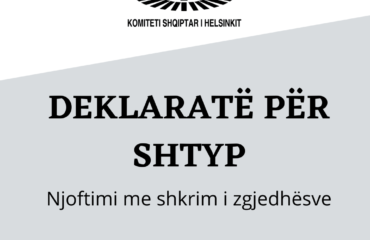