The Albanian Helsinki Committee (AHC), like all of Albanian public opinion, became aware of the U.S. State Department Report on Trafficking in Persons for 2014. We consider trafficking in human beings one of the gravest forms of violation of human dignity, rights and freedoms and therefore are concerned that this phenomenon is not being appropriately prevented, both in our country and in many other countries. Besides some achievements, the Report highlighted that the country is a country of origin, transit and destination for trafficking in human beings and that the phenomenon involves women, children, and adult males, Albanian and foreign. The Government of Albania, although it improved efforts toward law enforcement by investigating and convicting more traffickers, including those who forced children to beg, has not fully met minimal standards for the elimination of trafficking because of shortcomings, negligence, and lack of cooperation in carrying out duties to fight this phenomenon on the part of law enforcement bodies such as State Police, the Prosecutor’s Office, the Court, relevant national and local government bodies.

AHC is particularly disturbed by the fact that a person involved in these macabre crimes has managed to be included in the country’s highest lawmaking body.

Criminal offenses of trafficking in human beings, because of their nature and elements, may only take place in the circumstances of negligence of duty, involvement in these activities of persons with power, or tasked with important public functions. Therefore, we demand from all political forces, especially those mandated to govern, to take immediate measures to create the legal and practical conditions for the removal as soon as possible from public decision-making and executive structures as well as from their party structures of all incriminated persons, particularly those involved in trafficking and corruption, which are causing serious damage to the interests of citizens and the country.

We also suggest to all state bodies to study this report carefully, analyze without delay their own activities, and take measures to improve the activity for preventing and fighting the phenomenon of trafficking in human beings and create optimal conditions for supporting and rehabilitating victims. Police and justice bodies should build their capacities toward the discovery, investigation, and adjudication of these dangerous criminal offenses, in accordance with the law, avoiding cases of penalization of victims.

AHC supports the recommendations mentioned by the U.S. State Department’s 2014 Report on Trafficking in Persons, and will be supportive of all measures and efforts by Albanian state structures to fight this phenomenon. 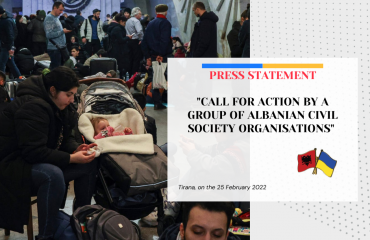