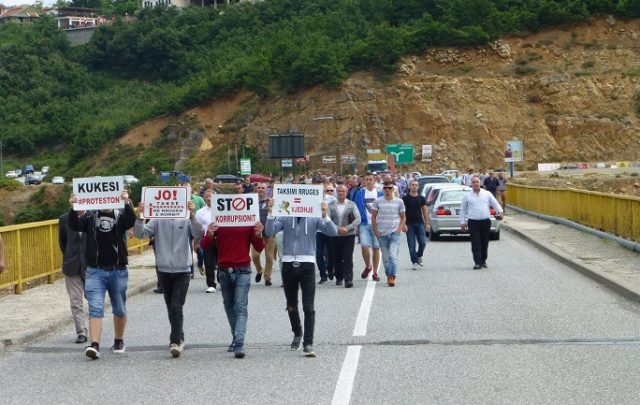 The Albanian Helsinki Committee (AHC) has followed the protest of Kukës inhabitants to express their dissatisfaction on the fee for maintaining the Nation’s Road. This right, according to article 1 of the Law “On rallies” is limited only when national security, public safety, protection of public order and prevention of crime, protection of health or morals, or protection of others’ rights and freedoms are threatened.

Freedom of assembly allows the public display of dissatisfaction, indignation and criticism, which serves as an alarm bell for what doesn’t go right, giving the state the opportunity to reflect and correct its stances or measures it has taken.

There are cases when timely consultation of the public is not only necessary but also represents a legal obligation. This is also the case of the Kukës inhabitants who oppose a policy of public interest. Delays in this regard were also highlighted in the press conference of the Minister of Infrastructure and Energy.

AHC thinks that in such cases, when citizens protest about a sensitive issue that also has to do with their limited economic capabilities, the problem should not be politicized as it harms their just cause.

During monitoring missions that AHC has conducted based on complaints of citizens about violations of their rights, it has found lack of information and consultation on issues and causes of public interest, particularly regarding the situation of the environment and its condition, which runs against article 56 of the Constitution.

According to information from the media and statements by the police, a total of 23 persons were detained and 13 police officers were injured during the Kukës protest. The criminal case has been initiated and justice bodies are the ones to decide on everyone’s responsibility or lack thereof.

It has been evident that some protesters used violence, which does not comply with requirements of the constitution and law no. 8773, dated 23.04.2001 “On rallies.” Prosecutorial and court bodies will establish whether police bodies acted or not in accordance with the law.

AHC was informed that the persons detained in Kukës were brought to the Tirana Local Police Directory and relevant police commissariats. AHC conducted monitoring the Tirana Local Police Directory where 12 detained persons had been accommodated and in Commissariat no. 3, where 4 detained persons had been accommodated. According to claims, they had been detained in Kukës in the early hours of the morning (03.00-04.00), of April 1, 2018, and had been transported straight to Tirana. During the monitoring, we met with the detained persons and, according to their claims, they had not been given any cause for the detention and their rights guaranteed by law. Besides, although relevant process verbals carried the date of April 1, 2018, they had become aware of their contents the next day (April 2, 2018). For this delay, we met with representatives of the Tirana police directory who claimed that the preliminary investigative actions were conducted by the judicial police of the Kukës local police directory and that they were brought to Tirana due to capacity limitations. In Commissariat no. 3, we met not only with the detainees but also with police officers of this Commissariat who said that the Commissariat only provided accommodation and food.

During the monitoring, it resulted that the detainees had not been immediately granted the right to defense. This right was provided to them the next day after the detention, precisely on April 2, 2018, which is against article 34/b, item 2, of the Criminal Procedure Code, which stipulates the rights and guarantees envisaged for the defendant and detained person.

Today, on 04.04.2018, around 10.40, we learned from broadcast media about the tense situation in the Tirana Judicial District Court, where the arraignment hearing for the protesters detention was held, in accordance with article 258, item 1 of the Criminal Procedure Code. As a rule, judicial hearings are open to the public, except for cases of adjudication behind closed doors, in accordance with article 340 of the Criminal Procedure Code. The discretion to determine and argue for adjudication behind closed doors according to this Code is with the court, but in any case, the upsetting of the regular conduct of the judicial hearing cannot be justified, especially actions of an influencing or intimidating nature on the court.